The pride of Baroque Gothic, the Pilgrimage Church of St. Jan Nepomuk at Zelená Hora, was rightfully entered in the UNESCO Heritage Sites. Its creator, the ingenious architect and builder, Jan Blažej Santini-Aichel, was supposed to become a master mason according to family traditions. However, his father decided that it would be better, if his artistically gifted, but physically handicapped son would learn to be a painter and study basic construction engineering. He could not have been more right. During his relatively short life – he died at the age of forty six – Jan Blažej created about 60 structures of extraordinary quality. Roughly ten of them are considered top examples of European architecture of the time.

At the age of 23, the gifted builder was awarded his first commission. Abbot Wolfgang Lochneren trusted the construction of a convent for the Cistercian monastery in Zbraslav. The well-educated Abbot was impressed by Santini’s innovative concept of the convent, as well as the fact that the young architect not only was multilingual and has a good knowledge of geometry, but was also knowledgeable in Christian and religious mysticism. His recommendation opened the door for Santini to other ecclesiastical projects. Only two years later, he was commissioned a contract for the construction of a monastic church in Sedlec near Kutná Hora, there upon in Plasy, Kladruby, and Rajhrad.

Mutual understanding in the area of architecture and arts formed a strong, long-lasting bond between Santini and Abbot Václav Vejmluva, who headed the Cistercian monastery in Ždár nad Sázavou. Thanks to this relationship, the town became the canter of Baroque Gothic in Bohemian and Moravian lands. In addition Santini’s participation as an architect in the construction of the church at Zelená Hora, he also took part in the extensive reconstruction of the monastery’s formerly Gothic part. Some of the original monastery’s structures remain on the estate to this day. 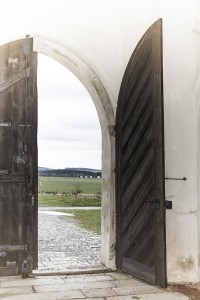 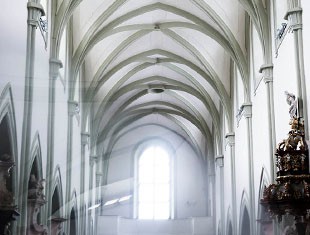